“With automated drip irrigation system powered by a solar pump, we are able to optimize water use for agriculture keeping in view dwindling groundwater resources in Punjab”, says Mr Mustapha Yousaf while explaining how adopting efficient irrigation technologies and applying water saving farming techniques are helping him improve productivity on his farm.

To help farmers save water and improve productivity, Nestlé Pakistan has collaborated with the Punjab Government and farmer community to promote drip irrigation.

Mustapha is just one of the many farmers Nestlé is working with in order to promote drip irrigation. Nestlé is covering 40% of the drip installation cost while the rest is being covered by the Department of Agriculture, Government of Punjab. In 2019, the company aims to reach 168 acres of successful drip installation. 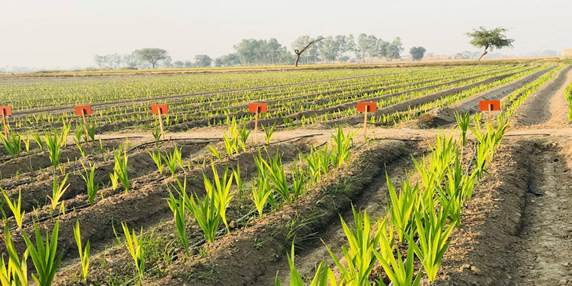 “With drip, we have been able to enhance productivity by 30% and there is about 50-60% saving in terms of water as compared to flood irrigation”, adds Mustapha who is working to further reduce water consumption on his farm by using the smart soil moisture sensors.

The sensors have been developed by Nestlé’s Milk Collection and Dairy Development (MCDD) team in collaboration with Waziup in Italy, University of Pao in France and Lahore University of Management Sciences (LUMS) in Pakistan. It measures the water level of soil and regularly sends data to a cloud. The farmer receives uninterrupted information about how much and which area to irrigate; keeping the farm from under or over irrigation. Mustapha is expecting another 20% reduction of water on his farms as a result of Water Sense Technology.

And this is not all, Mustapha is also working on installation of solar pumps on his farm with the help of Punjab Government (80% contribution from Punjab Government and 20% by the farmer).  In parts of Punjab where unannounced power outages last up to 8 hours disturbing the irrigation schedules, luckily there is good amount of sunlight to use solar panels as the power source. “Solar power, in Punjab is estimated to be operational for 330 days in a year. If we rely only on traditional grid network, the drip irrigation system would run for only 150 days in a year”, Mustapha says.

The three technologies combined save input cost to Mustapha, it has reduced the use of pesticides and helped reduce disease incidence in the crop. Mustapha’s farm is being used as a model site by other farmers; with the help of drip irrigation and Water Sense, the optimal level of moisture is maintained followed by solar panels assuring a sustainable source of power at all times.

There is a massive potential of water saving in agriculture sector in Pakistan that consumes about 90% of national water resources while having one of the lowest per hectare yields globally.

Agriculture is an important sector of Pakistan’s economy accounting for almost 21% of GDP , according to official estimates. The sector directly caters more than half of the country’s population and employs half of the labor force.

Improved agricultural productivity depends on efficient use of resources; principally land and water.  However, the key to successful change rests with the large landowners owning 40% of the arable land and controlling most of the irrigation system.