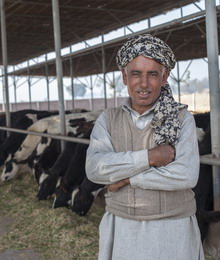 When Nawaz Cheema got involved with the Nestlé Dairy Development Programme in 2010, little did he know that it would change his life forever. A small-scale farmer from Kot Ishaq district, Hafizabad, Cheema reared a few animals on his farm. He was largely dependent on agriculture as his primary source of income which remained inconsistent given the vagaries of weather. Even the animals he reared didn’t exactly turn out to be the cash cows he had hoped. It was the Nestlé Milk Collection Dairy Development staff that persuaded him to invest more time and resources into dairy farming, and explore the possibility of taking it forward as a business venture.

“It was with their help that I constructed a shed and learnt about getting the maximum benefit out of my animals,” adds Cheema. For this purpose, he also took a loan from a local bank – which Nestlé facilitated – and purchased some 40 animals. The results, he says, were satisfactory and soon he was able to acquire 20 more.

Fast forward three years later, Cheema is a successful dairy farmer who makes enough money now to send his children to a private, English-medium school, buy a car and renovate his house. “Today, I have 100 adult animals and 20 heifers, and a milk production of 700 litres per day. The cash flow in dairy farming is quite fast.

I get paid every week while for cash crops, I would have to wait for six months,” Cheema explains happily. In fact, his business is thriving to the extent that he has also employed six other people to manage his farm for him. But it’s not just the money that Cheema is happy about – it is also the quality of milk being produced at his farm. His animals are free from disease and are being reared in a safe, hygienic environment, thanks to Nestlé’s relentless efforts