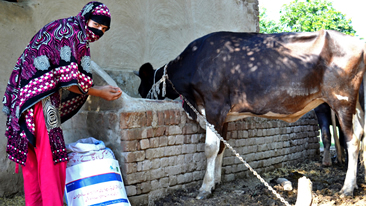 21-year old Rahat Parveen’s life appeared to be like a dead-end, after she was prohibited to return to school two years ago, due to financial constraints.“We’re a big family of 14! It never occurred to me that my family would have to struggle this much for barely making ends meet, with my father being ill for the past many years; my brothers are younger and two of my married sisters separated from their husbands and returned home. There was little or no source of income.”

The Dairy Project is providing trainings to women from Punjab’s rural communities to become livestock extension workers. The Dairy Project provides a basic one month long course, and the curriculum and graduation certificates are provided in joint collaboration with the University of Veterinary and Animal Sciences (UVAS).

In December 2011, Rahat had the opportunity to meet a Dairy Project social mobilizer and was introduced to the project. On January 2, 2012, a keen Rahat began the one month training program and passed her UVAS exam successfully. “During the training, I learnt various new techniques, including controlling dairy animals through the crisscross method, preventing a fatal respiratory disease such as Hemorrhagic Septicemia (HS), animal nutrition and feeding, and free access to water for animals. Towards the end, I was selected by the project to sell Vanda, a top quality feed which contains the vital ingredients necessary for the well-being of animals, especially those which are young and producing milk,” she explains. In April 2012, Rahat was given 30 free-of-cost Vanda bags by the Dairy Project, for sale in her village. She marketed her product (Vanda bags) through flyers, and successfully sold 30 bags for PKR 1000 each and earned an income of PKR 30,000. Now she is in a profitable business by selling the Vanda bags at her small general store in the village. In addition, Dairy Project has given Rahat a cellular phone, so she can liaise with Vanda suppliers in the market. With the profit she earned, she has brought back the tradition of two proper meals being served at home and has been able to regularly purchase medicines for her ill father. More importantly, the family owns a very small piece of land, and she has bought some water for her crops. Once the harvest reaps an income, she will reinvest it into the Vanda business and purchase more bags to sell.

“The Dairy Project has not just made me a seller of Vanda bags; it has opened my eyes towards dairy farming. With this income, I’m also going to arrange for free access to water for my three dairy animals,” she says on a positive note.