Nestlé Pakistan, organized an event to commemorate International Women’s Day by providing a platform where inspiring, successful women shared their stories with others. 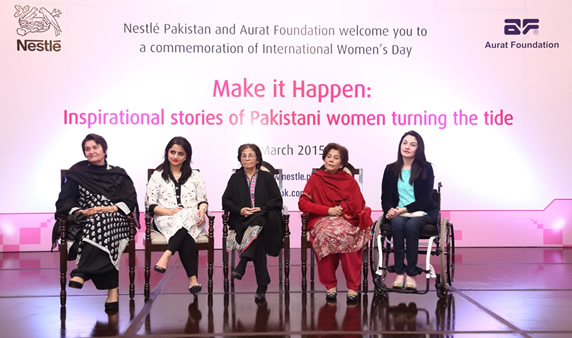 Artist Muniba Mazari said she looked at her accident as an “opportunity”. She said she had “seen the worst but that brought out the best in me… I wanted a hero in my life but I couldn’t find one. So I decided to become one.” She said to her Pakistan was the perfect place for women to make their mark. 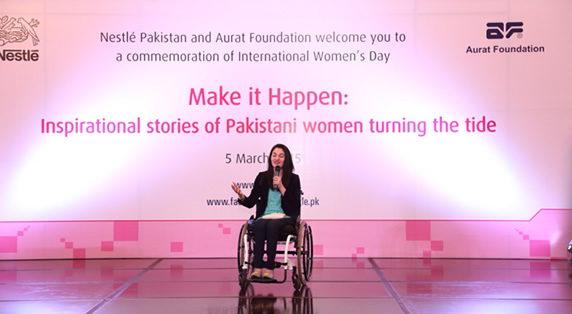 Mira Phailbus said when she was made principal, fathers used to come and tell her to offer “easy subjects” so that they could pass and then get married. She told them if they just wanted a college stamp they should take their daughters elsewhere because her vision was to help the girls “become independent and decision makers”. 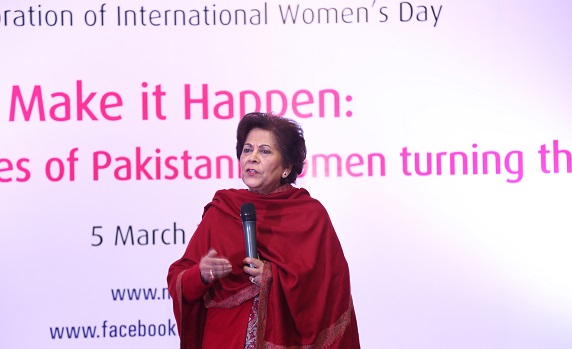 Nasreen Zehra went back to work after a break of 15 years and started her career at Aurat Foundation in Quetta. The job, she said, had made her stronger and empowered her. When her husband passed away, her work was what gave her strength, she said adding that she was proud that she had empowered her daughters too.

Fiza Farhan said she had not wanted to be defined as somebody’s daughter or wife and had wanted to carve out an identity for herself. “Your gender becomes a strength” when women decide to go out and work. “We have one life so live the life that you want to live. Create opportunities for yourself and other women. Believe in yourself and in your passion,” she said.

Justice (retd) Nasira Iqbal described herself as being part of the generation “that broke the barriers.” Hers, she said, was the time of “conformism and today is the time for change.” It was only when her children were in high school that she decided to pursue her own interest. She passed her law exams but started her practice only when her husband retired as a judge. She said she had to face a lot of sexism and attributed her success to good luck as well as hard work. “Only by leading the life you live can you create opportunities for other women,” she advised.

Nadia Jamil called the panelists “powerhouses” in themselves who had made the lives of other women better. She said she had been influenced by each of the panelists. 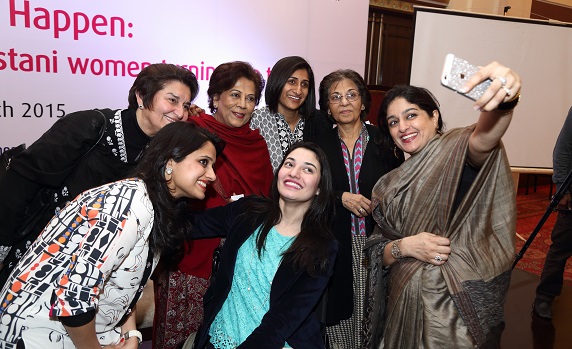 Globally, Nestlé is a signatory to UN’s Women Empowerment Principles and UN’s Every Woman, Every Child initiative. Nestlé Pakistan is helping women realize their potential through initiatives such as Dairy Hub, Healthy Women and Kero Aitemaad. The three projects are part of Nestlé’s philosophy of Creating Shared Value.

The Dairy Hub initiative is directed at creating economic opportunities for women. Female farmers are trained in order to help them improve farm incomes and facilities. So far 10,882 female farmers have been trained.

In addition, in order to ensure that women become a part of the workforce, since 50% of college graduates are women, Nestlé Pakistan has started reaching out to career aspiring women and encouraging them to break stereotypical barriers through its Kero Aitemaad – Believe in Yourself initiative. According to Mr. Waqar Ahmad, Nestlé Pakistan is also focusing on equipping young girls and women with nutrition knowledge – through Nestlé Healthy Kids and Healthy Women initiatives – so that they can take care of themselves and bring up healthier generations.

Read the full Press Release on the Nestlé Pakistan website.