The Village Woman Becomes an Agent of Change 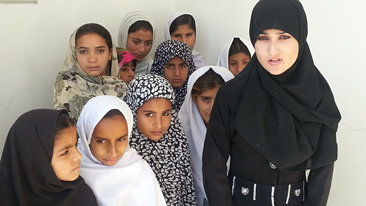 Young and ambitious Khalida had always wanted to give something back to Peerano Goth and the community she lives in. The village near the Port Qasim Factory is where she was brought up and studied. The best way to ‘pay it forward’ was to teach at the village school. But that seemed difficult when the government primary school at Peerano Goth closed down. “Initially, the village school at Peerano Goth did not have a building and classes were held under a tree where every morning the children of the village would gather and the headmaster would give a general talk. On days when the head master was absent, someone else from the village would take his place,” says Khalida.

“Ever since the school was rebuilt, I feel hopeful that the lives of the people in my village can improve. Thanks to the initiative by Nestlé, education is accessible now,” she says, “More children now spend time at the school, learning, instead of playing in the mud.” Following Khalida’s footsteps, her two sisters also teach at the school. Khalida is hopeful that the school will be upgraded to a middle/ secondary school and will offer technical/ vocational training to the youth and adults of the area in the coming years.